Dining in august in Barcelona can be problematic:

Joooderrrrrrr… hunger really started to set in but then I remembered Timeout recommended Kiku. It’s near my flat and I’ve passed it millions of times so we gave it a try. And it’s open in august 🙂

Kiku opened in 2014 and is run by a local chef named Cecilia – it shares space with Raval Bar, which has more typical food and drink offerings, like those gigantic cups of gin & tonic that are all the fuss in Barcelona these days. The style is traditional izakaya, though the place has a lot of metal and reminds me of an airport lounge. It has a small menu, featuring all the normal favourites, with attentive and friendly local staff. We started with some tasty breaded jumbo prawns (llagostins) and a delicious seafood yakisoba, then followed by a selection of very nice quality assorted sashimi. The sashimi was served on ice – sushi should not be, as the rice should not be cold, but with sashimi it’s ok. In any case given how it was 35º outside we didn’t complain. They gave us complementary sake afterwards – a take on the Spanish chupito 🙂

The total for two people was 40 euros exactly, beers and wines included, a very good deal and a perfect dinner for these incredibly hot and humid august evenings when one just wants light food and to cool off for a couple hours. To resume: a quality japanese restaurant right in the center of Raval.

There is take-away service. 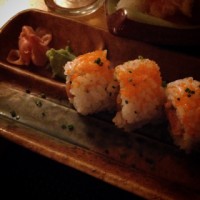