So, before trying one of the trendiest Japanese places in town, I changed my mind and decided to try this place in the hood instead. Ramen Can opened in November 2013 (it turns out that the Japanese chef opened a couple of ramen places back in 2009 in California, USA) and knows exactly what neighbors like: a not pretentious place to have Japanese food. No artsy flourishes. When I first came in Ramen Can, they were playing top 80’s music, so I obviously felt home!

But what is ramen? It is a Japanese noodle soup served in a rich chicken broth, flavoured with soy sauce or miso, and toppings such as sliced pork, seaweed nori, and colorful kamaboko. The traditional Japanese cuisine has been registered on UNESCO’s intangible cultural heritage list!

I ordered a Ramen Shio: the broth is so filling that it must be made with chicken and pork bones, which make the soup well flavored. It comes with Chinese-style noodles, generous portions of pork, a boiled egg, bean sprouts, green chives, mushroom, Chinese cabbage, pak choi, carrot, onion, garlic and seaweed nori. And if you do not feel like Chinese-style noodles, you can order udon or soba noodles instead.

here are four different types of ramen (a vegetable one too) and side dishes: seaweed green salad, maki sushi, chicken curry rice, vegetable or chicken gyozas (their pan fried tender dumplings have a golden brown and crisp bottom), onigiri (white rice wrapped in seaweed nori, with various fillings) and edamame (Japanese soybean). You can choose one of their premade combos!

Note to self: this soup was so comforting that I climbed up to Montjuïc hill at least a couple of times to lower the broth. 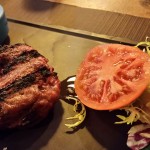 Yours (formerly known as Yourburg) 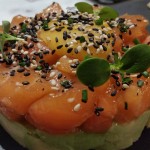 « Spice Café, the best carrot cake in town
Come in and enjoy a Timesburg moment »